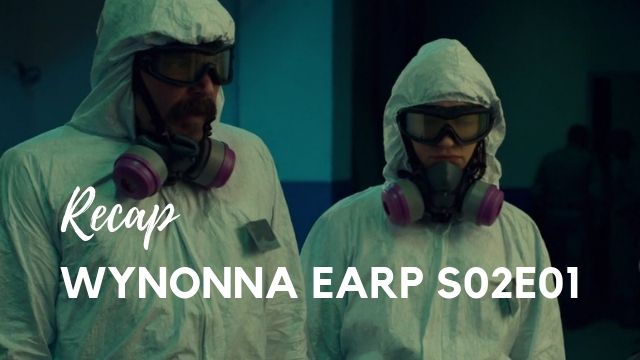 After the cliffhanger at the end of season 1, we find out that Waverly didn’t shoot and kill Wynonna at all, she was apparently shooting at a big human-like monster with a scary mouth and no eyes. Surprise!

Dolls has managed to call off the nuke on Purgatory thanks to his secret weapon (his mobile nobody thought to confiscate) and Bobo has been mercy-killed by Wynonna, who realized it was the humane thing to do after all the torture she’s done herself in past episodes. Dolls’ boss, Miss Lucado, is pissed and tasers him while he’s being constrained by two other agents. But the electric current is smart enough to only jolt him! Fancy.

Wynonna goes to find out where Dolls was staying and finds a female agent prancing around in her underwear. There’s a long fight scene. She was Doll’s friend and so now they’re in this together. They have to get him back!

Waverly takes care of Nicole who’s still bruised from being shot by Willa Earp. They have some time to make out, finally, but are interrupted by Doc Holliday walking into the kitchen. Also, Waverly “tastes different”. I think they call that halitosis. Moutwash might help, or maybe an exorcism. It must be pretty bad, because Nicole excuses herself to feed her cat. A cat we have yet to see!

Dolls is in a cage suffering from withdrawal of lizard suppressants or something. His boss spells out why she can’t stand him. (He survived Kadahar when her husband didn’t). Meanwhile, the Earps and gang are figuring out how to save Dolls.

Eliza, Doc and Wynonna go back to Dolls’ old office and knock out the Black Badge cleaning crew. They are a pretty pathetic bunch – not at all trained killing machines. You only have to hit them once to find out where the secret lab is hidden. Also, Wynonna finds out that Dolls is really a lizard man who needs his meds. She sure knows how to pick ’em.

They sneak into the Black Badge headquarters and their plan goes awry, but Waverly saves everyone with a British accent and silly glasses. Security really isn’t all that tight in there. Also, they keep their scary monsters in cages that can’t hold them if they get angry. Amateurs!

Waverly charmes a lab technician called Jeremy and then hits him over the head when he explains to her how to disable all the security doors. And he’s all like: “Ow, we can’t bleed in here!” The evil monster gets out, but Waverly is an even bigger monster, as it turns out. It’s all a bit contrived and silly and in the end they save Lizard Man together, hooray. And then he flees.

Lucado has a gun on her person, which she’s not allowed to have and apparently nobody checked, but which comes in handy when her boss, Moody, decides to shoot Eliza because the show didn’t know what to do with her for the rest of the season, clearly. Nobody seems too sad about it. Then they get coerced into signing away their life by pressing a bloody fingerprint to a contract they had no time to read. I doubt that would hold up in court.

In the end, everyone leaves, Dolls lets Wynonna know he’s still alive, Nicole is sad that she didn’t get coerced into working for Black Badge (rather than Purgatory PD) and Waverly gets to wear her black contact lenses again so nobody forgets she’s still EVIL! 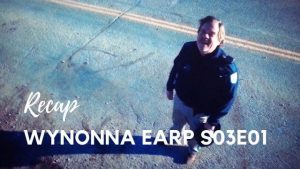 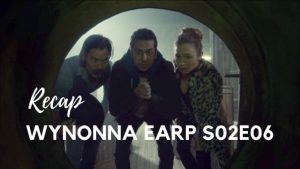 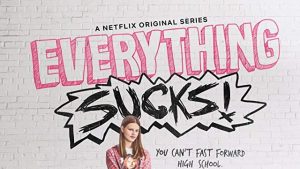